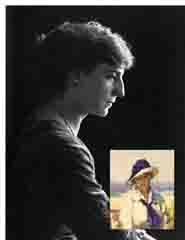 Maud teachers included Mabel Hill, Mary Elizabeth Richardson, James Nairn and was she heavily influenced by Arthur Dewhurst Riley, Maude entered competitions and won free places at WTC She completed her teachers certificate by 1899 and took over Nairn’s classes when he died in 1904. In 1910 she held her first exhibition of water colours with varying reviews and in 1911 left NZ. She worked in Europe but took no formal lessons rather relied in Riley’s advice that there was too much teaching especially for promising students” She spent time painting in Breton then moved to Sydney in1913 and was a foundation member of the Australian Academy of Art. She exhibited in the 1940 NZ Centennial exhibition and is recognised as a New Zealand artist who never forgot the subjects techniques and assurance of her early training at WTC.